Where and How to Swim With Dolphins in Oahu Hawaii

Don't you find it amazing that dolphins have become humans’ best friends in the ocean, and happy that you can easily swim with dolphins in Oahu? These clever mammals are to us in the ocean what dogs are on land, and this natural attraction has made a dolphin encounter one of those island activities you just have to do.

While it isn't one of the things you seek if you're visiting Hawaii on a budget, it definitely was on our bucket list when we visited Oahu, the most visited island in Hawaii.

In Oahu this is very easy accomplished, as you can simply join one of the many North Shore dolphin swim tours in Hawaii and better West coast tours where dolphin excursions are very sought out experiences.

I’m one of those people who prefer to see animals in their environment. I like to see them free, observe how they approach us and how curious they are about what we humans do, and want my kids to experience this when possible. Some time ago I had been on a dolphin watch in Puerto Vallarta (Mexico) and it turned out to be a magical moment I will not forget.

Do dolphins like to swim with humans? Apparently so. The dolphins we saw in Puerto Vallarta were naturally interested about who we were and swam to and around us. Unfortunately the water was murky and visibility not the best, so having the chance to join a dolphin swim in the clear blue waters of Oahu’s west coast I did not hesitate.

Where to Swim with Dolphins in Oahu

If you answered yes to any of these questions then swimming with wild dolphins is probably not the best option for you.

The ocean was crystal clear! We were actually cruising very fast when I took this picture.

If this is your case you have two very easy and convenient options: Dolphin Quest Oahu or Sea Life Park Oahu (the only Sea Life Park in Hawaii).

Dolphin Quest Oahu offers swimming with dolphins in Oahu and two more locations, and focuses on conserving and studying these magnificent sea mammals we all love. Dolphin Quest Oahu  is located inside Kahala Hotel and Resort, making it very convenient if you decide to spend a few nights here.

Sea Life Park Hawaii is a small family oriented Oahu aquarium that has several sea life and dolphin encounter programs- you can check their schedule here . Plan on spending some time walking around while your kids learn about the ocean and its creatures!

However many find these parks non ethical, and while I do understand they are the only way for little kids to see and learn about ocean I highly recommend you swim with wild dolphins instead if you are traveling with older kids or as adults.

Imagine being able to see a spinner dolphin like this in the wild while you're in Oahu!

Swimming with Wild Dolphins in Oahu

Almost all- if not all- of the Oahu dolphin swim tours are on the West coast of the island. The reason is that the ocean is less choppy on this side of the ocean making sailing, and spotting them, easier.

Oahu’s West coast has a permanent pod of about 200 dolphins (most of them are spinner dolphins)  that makes observing them very easy. We joined the Best of the West tour with Sail Hawaii, an experienced operator that not only caters to tourists but studies these fantastic creatures too.

All dolphin swim tours in Oahu start early in the morning, so make sure you plan ahead.

Our tour left Waianae harbor at around 8 am, so make sure you begin your 2 hour bus commute from Honolulu early- or perhaps even better rent a car for a day with Cheap Rent a Car. These guys will get you on four wheels for around 25 USD per day, well worth it in my opinion.

Luckily for us we were taken there by Mario and Jose, two friends from Spain we had made a few days before making the trip that much easier, and eventually they decided to join the Oahu dolphin swim tour as well. 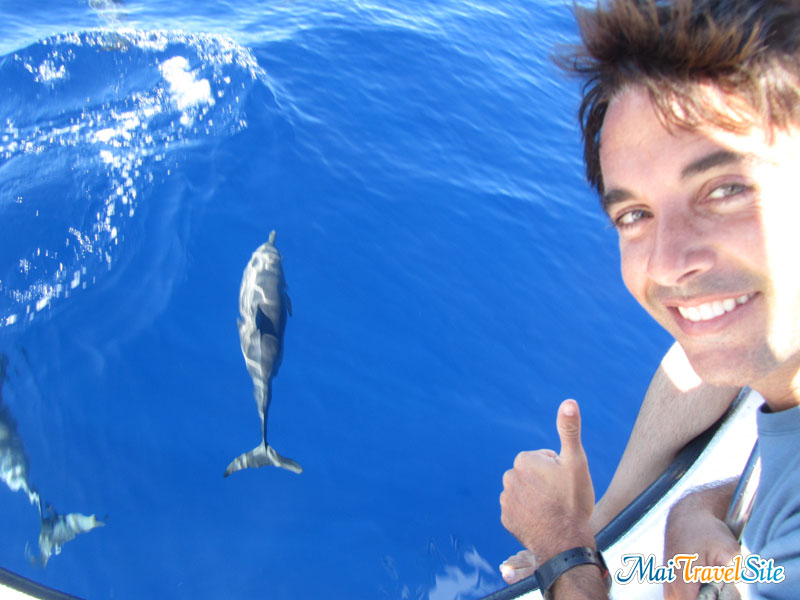 It was a beautiful morning, with a neon blue sly and dark blue ocean, split by lush green mountains when looking at the shore. Only 20 minutes after leaving the harbor did the first Oahu dolphin appear, leading the boat at times and playing in the wake at others.

Soon the rest of his group appeared- most were spinner dolphins which would leap and complete three or four spins when airborne.

How to Visit Hawaii on a Budget

And then the real fun began. We were offered some healthy snacks (included in the tour price) and were instructed to sit at the back of the boat and get ready to jump into the ocean.

Unfortunately it is mandatory to wear a personal flotation device, which makes the swim safer and lets the staff spot the swimmers easily but also limits your swimming abilities more than I would like. In any case with a little effort you can dive a few meters. 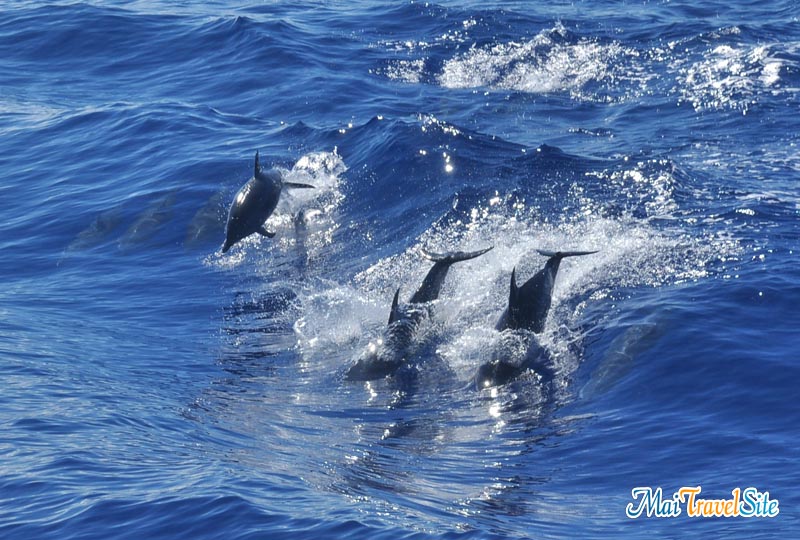 The captain would leave the dolphins behind and we'd jump into the water ahead  of them, and wait for them to reach us.

In order to increase the interaction with the dolphins the captain will drop you about 100 meters ahead of where the dolphins are and in the direction they were swimming, the idea being that when they find you they will become interested and swim around you.

But alas, not this time, as they swam right under us and continued their way. We repeated the process two more times with the same results, and then learned that a nomad pod of about 300 dolphins was swimming along the coast and all the local dolphins were heading their way to check them out- not surprising as dolphins are very social.

Swim with Turtles in Oahu- Too

We then made our way to the second part of the tour: a snorkeling session where we were guaranteed we’d see wild turtles swimming freely- and we did. The reef itself is not exuberant in life, but there is a particular spot where huge turtles show up to have parasites eaten a by a particular species of fish. 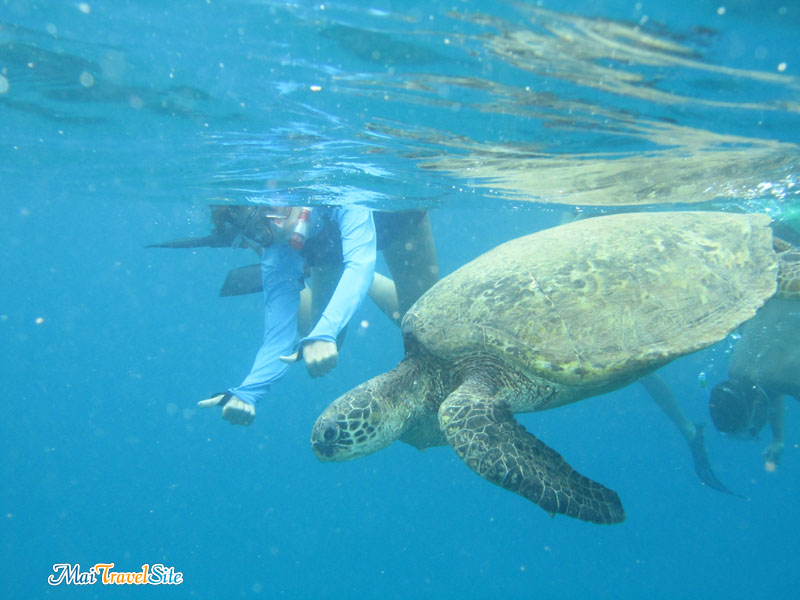 This symbiotic relationship creates a magnificent opportunity to take pictures and video if you have the appropriate gear- which I strongly recommend you do when doing incredible tours like this one. 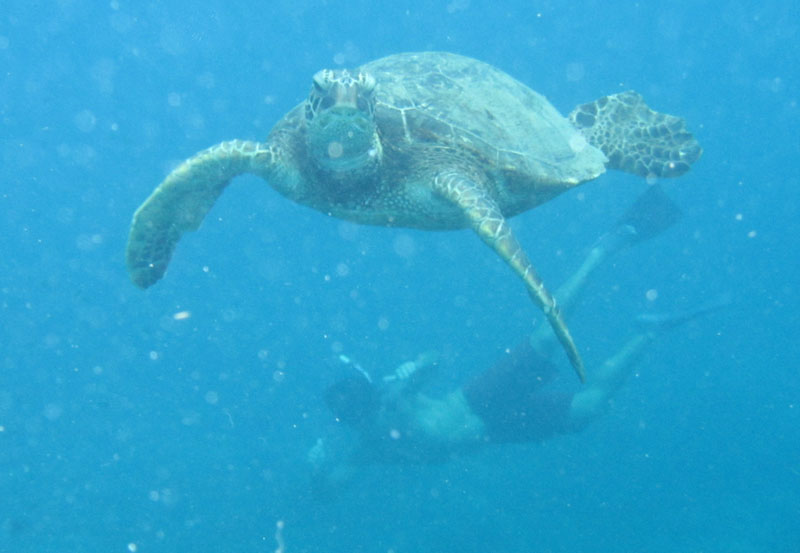 After about 40 minutes of snorkeling (which seemed more like 10!) we then swam back to the boat and made our way back to the shore munching a bit more along the way.

This said you may want to know where to swim with turtles in Oahu for free, something I did a few days later.

Book a tour that includes swimming with both dolphins and turtles!

Not all dolphin swim tours include swimming with turtles as well, so try to book a tour that offers both- specially if your Oahu vacation is on the short side.

Best of the West is a fantastic tour to join if you want to swim with dolphins in Oahu, but there are others. The boat is big enough to fit comfortably eight passengers and the crew, the snacks are healthy and abundant and the staff is knowledgeable and exciting.

It was a pity that this time the dolphins did not interact as much as they usually do when in the water, but you can’t control nature.

I do have to say that having to use the personal flotation devices even if you’re and experienced swimmer rather annoying, although I can understand the safety concerns of the crew (you don’t have to use it during the snorkeling session though!).

Overall Best of the West is a superb tour I highly recommend- simply check the pictures and video I filmed that day!

Plan Your Trip to Oahu

Get Your Guide offers small group tours and activities in Oahu including tickets to the popular Oahu attractions. I've done dozens of tours with them and have enjoyed them all!

7 Things to See and Do in Kauai (Hawaii)

[…] If you want to enjoy even more environmentally friendly and humane interactions with marine life, find out how to swim with dolphins in Oahu here. […]

[…] a surf meca and beautiful beaches. There are many things to including: hikes, canyons, volcanos, swim with dolphins, museums, waterfalls and of course otherworldly […]

Wow! Is this real? How I wish to swim with dolphins in a very tropical and magnificent paradise. Thanks for posting puerto vallarta’s attraction.

Do try it someday Amie!

Dolphins always amaze me and I love how they swim up against boats. Did you see The Cove, a surfer has an amazing story about an encounter with a dolphin, I don’t want to spoil it in case you have not seen it.

Hey Ayngelina, I have seen the documentary indeed, perhaps one of the saddest when it comes to wildlife. I wonder if it is still happening, I have the feeling it is…

.Dolphins and stingrays are some of the most beautiful creatures in the world.

I swam with dolphins once in South Africa — didn’t get any great pics like these ones though!

Haha..glad you like them! I bet the water was colder too…

I really love this kind of adventure so much fun………What I love most about Hawaii is how spectacularly diverse the U.S. state is

I don’t think I’ve ever gotten a useable photo of a dolphin in my life! What I remember most about snorkeling in Hawaii was the turtles.

Don’t they rock? By the way, I’ll be sharing a photo of a dolphin to use as a wallpaper shortly…

Wonderful photos! I will always remember swimming with dolphins in the wild while snorkeling near Utila, Honduras.

So was that unexpected? Must have been memorable!

Is it bad that I think I would be totally scared doing that? PS.. that turtle is HUGE

Hey, to each his own…but you are right, it was quite big!!

Woooooow! Great experience mate! I remember swimming with wild dolphins in Australia last christmas. A family i met days earlier bought me a later plane ticket in order to stay one day longer and swim with the dolphins in the ocean!! One of the greatest experiences ever!!!

Where in OZ was this Sebastian?

Sounds like an amazing experience! I swam with them once, but it was totally unsanctioned in the Inter Coastal in South Carolina. I just jumped off the boat and hung out with them for a bit.

Hey, I am sure it was still a blast Diana!